"FAITH IS BIGGER THAN MAA"

Santoshi Path is not a popular or ancient religion or cult or an ideology but a SPIRITUAL SHOOL OF THOUGHT in Hinduism which not only teaches or encourages man to preach and practice Universal Brotherhood but dedicate himself to the very core development of mankind. The presence of he deity SANTOSHI MAA in every household empowers each of her devotee to fulfils his worldly responsibilities and dissipate happiness in unison with the Almighty "Shakti"

Today MAN is oblivious to the very existence of the Creator, Operator and Preserver of this unique Universe and Cosmos. The Santoshi Path motivates and inspires the mortals to follow BHAKTI PATH and be one with Maa through a Personal interface. Man, being enmeshed in an illusory web of the Unreal ignores this Santoshi Path which is the very essence of our lives. A mere initiation under Maa casts away this illusion and brings them closer to the Super natural.

The prime aim objective of the Santoshi Path is to create an intrigue in every devotee (as Curiosity is the mother of all revelations) to unravel the mysteries of Maa Santoshi and inturn become one with the same and attain the ultimate goal-SALVATION. The Santoshi Path also aims at introducing Maa Santoshi as the SHIV SHAKTI ROOP. It also strives towards bringing harmony, peace and mutual co-existence between people of various religious and races so that they are empowered to cross this large and devilish ocean of KALYUG.

Bhagat Jee, Shri Amit Saxena Jee has undertaken the responsibility of spreading this doctrine and awareness among the masses by constructing temples across the globe. 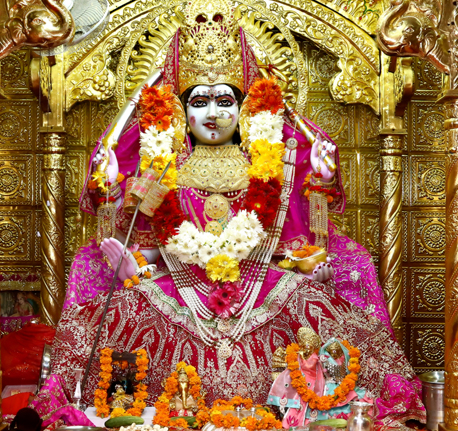